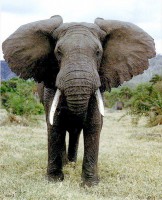 Have you ever been in the forest at night? The complex symphony of sounds that seems completely meaningless to a human listener actually carries very complex information, important for different animal species. Just like humans are able to recognize various acoustic patterns and ascribe different meanings to them, the case is the same in the animal world. Furthermore, sounds are not used only by animals living on the land, but by many animals inhabiting the seas and oceans as well. Bearing in mind that sound waves travel much faster under water than through the air, this is understandable. Most frequently, animals use sound signals as alarm calls and calling for a mate.

Apart from the visual displays alone, many animal species use sounds in order to make the visual displays more convincing. “The hiss of a cat, the growl of a dog, and the roar of a lion let opponents know that they are angry and mean business. Angry elephants flare their ears and wave their trunks while trumpeting. The trumpet is the final warning signal before they charge.”1 Beside these warning displays, animals living in groups usually have various alarm calls in order to signal the other group members in case a threat occurs. Some animal species have universal alarm calls, regardless of the type of a threat, whereas others’ alarm calls are more complex and depend on the type of a predator or a different kind of danger they are facing. A good example for the latter case are vervet monkeys.

Namely, “scientists who recorded sounds made by vervet monkeys discovered that they use a different alarm call for each of their three main predators. Even more interesting was the fact that each call provoked a different reaction. If one vervet gave the call for a snake, group members would all stand up and look around. When the leopard call was given, they would climb the nearest tree. When the eagle call was given, they would head for the high grass. To show that the calls had real meaning, the scientists played tape recordings of the alarm calls where vervets could hear them. Sure enough, the monkeys reacted the same way, just as if a group member had given them the signals.”2

Many animals, from sparrows to whales, produce different kinds of sounds in order to call for a mate. Usually the male is the one that starts the song and “females select the males that are most fit to mate. They use the loudness and duration of the calls to help them judge how fit a male is. In the animal world, the general rule of thumb is that stronger males will have louder and longer calls.”3 Most of these sounds, like cricket chirps or songbirds can be heard by humans. However, sounds produced under water cannot be detected by the human ear.

“The top honors for underwater communication goes to the two largest species of whales. Blue and finback whales have had songs travel more than 1,500 miles (2,500 km).”4 The songs these whales sing are some of the longest that can be heard in the animal world and can last up to fifteen minutes. Also, “the whales are constantly changing their songs and inventing new phrases to go along with common themes that get carried over from one year to the next.”5 According to the latest research, scientists have established that there is grammar revealed in a whale’s love song. Namely, “mathematical analysis of the song shows there are complex grammatical rules. Using syntax, the whales combine sounds into phrases, which they further weave into hours-long melodies packed with information. Although the researchers say these songs don’t meet the linguistic rigor necessary for a true language, this is the first evidence that animals other than humans use a hierarchical structure of communication. Whales have also been found to sing in dialects.”6 Different dialects that whales are using are “one of the finest arguments in support of cetacean culture”7 which, similarly to that of humans, practices a custom of courtship in the form of a love song.

As I have emphasized, various methods and complexity of communication in the animal world reveal great degrees of sophistication. Although in most respects the complexity of animal communication systems is nowhere near that of humans, researchers have discovered that whales’ communication shows signs of hierarchical organization which is one of the main characteristics of human language. As for other species, it is really rather difficult to come to an objective conclusion regarding the complexity of their communication systems. In layman’s terms, imagine your dog teaching you how to bark and you are doing it completely wrong, which makes your dog angry and frustrated. But that is perfectly all right, because you are not supposed to get it right – the ‘barking pattern’ is not in your genes, just as the ‘speaking pattern’ is not a part of your dog’s genetics. Therefore, instead of trying to find arguments to deny animals the ability to communicate, we should stop feeling endangered and try to find ways to understand them better. Funny as it may sound, this may help us understand ourselves better as well.

This site uses Akismet to reduce spam. Learn how your comment data is processed.